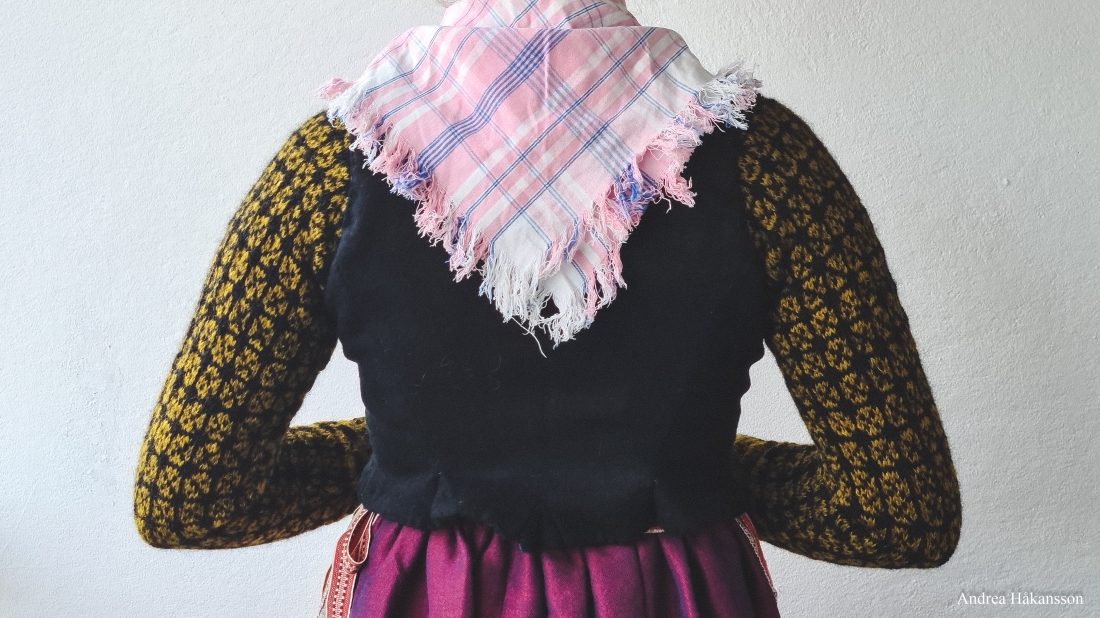 For a little over ten years I’ve had a dream to recreate the everyday clothing of my female ancestors in the early to mid 19th century. On my fathers side we had a family farm during that time (it still exists today, owned by non-relatives), which lies in the small village (if it even can be called that) of Svalhult north of Bräkne-Hoby, Sweden. This link will take you to a Google Maps-pin close to that location. It’s rural, and as far as I know they were probably farmers or the like.

I have previously written about my folk costume, and how it mainly fits the cathegory of festive wear. Silks and the like were accesible to even the farmers of Blekinge, as the coastal towns of Karlskrona and Karlshamn (the latter is where I grew up) were busy with trade, which gave the people the possibility to buy fabrics. They were thus not limited to only handspun and handwoven fabrics, even if that of course existed and was used, even in their festive wear, though you would probably have wanted as much fine silks and cottons as you could have afforded for those.

Most of my pieces for my folk costume, both bought and recently made, wouldn’t fly under the radar as ‘everyday wear’, so my goal in the end has been to find out as much as possible about what they would have worn and how it was made. The ever inspiring Lina Odell of Blekingelivet brought my attention to a piece of clothing that I had not heard about before (at least not in the context of Blekinge), which supposedly was part of the everyday attire.

So what is the base for this piece of clothing? Stickärmaliv (eng. ~knit sleeve bodice/waistcoat) are present in the folk costume of several other areas in Sweden, but no extant garment has survived to this day in Blekinge. The only surviving evidence of these being used in Blekinge is an account of a woman that speaks the following (loosely translated to English by me):

At home they used ‘stickärmaliv’. It was like normal bodice/waistcoat with wide knit sleeves in black and green, red or black or so, and often in patterned knitting in squares or the like.

Lina, whom I wrote about above, had made herself a Blekinge stickärmaliv, which is absolutely gorgeous. She based the pattern for the sleeves off a pair of mittens in the collections of Nordiska Museet which are knit in red and black with a square-ish pattern as described in the quote. I love that there are several visible mistakes in the pattern of the mittens, and in different ways too. That make me connect to the person who made them a little bit more than if they were all perfect. She based the bodice part on an extant piece in the collections of the school she works at and finished her stickärmaliv. Since then she has written up a pattern and very kindly asked me if I wanted to be a testknitter/pattern tester for her. I of course said yes in a second!

Lina was kind enough to provide me with yarn to knit the sleeves out of. Black and green yarn from Ullcentrum Öland, where the green is plantdyed with red onionskins. I used a black, felted, woolfabric in my stash for the bodice part, and handwoven linen for the lining. I even made my own hooks and eyes for the closure. Everything was sewn with unbleached linen thread, except for the small pieces of silk tape that covers some raw edges in the back which I sew down with silk thread. A very fun project, and I am very happy to have made it!

Next I will post about the headwear I’m wearing in these pictures – the spethätta.

Leave a comment in the meantime if you like! What is your latest obsession when it comes to history or crafting?

-thoughts and ideas concerning my work and hobby